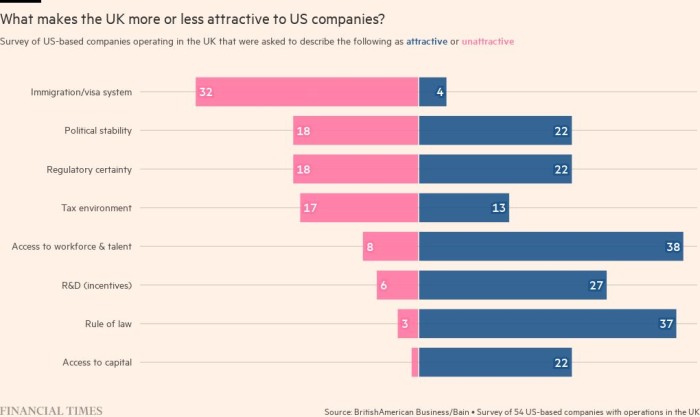 Confidence among US companies with British operations has slipped over the past year because of poor UK-EU relations after Brexit, concerns about labour shortages and rising corporate taxes, according to new research.

A survey of 54 US-based companies operating in the UK for BritishAmerican Business, a transatlantic trade association, found 20 per cent said their confidence in the UK was increasing, compared with 25 per cent last year.

The survey, conducted by Bain & Company in April and May this year, found the failure to build a constructive relationship between London and Brussels since the UK left the EU had a negative impact on sentiment.

“What US companies want is clear: to attract future investment, US investors want the UK government to repair its political and trade relationships with the EU,” said the report.

The research comes as candidates in the Conservative party leadership contest have expressed support for legislation to unilaterally rip up part of UK prime minister Boris Johnson’s withdrawal agreement with the EU, prompting Brussels to warn of a possible trade war.

When asked what would increase the UK’s attractiveness as an investment destination, almost 80 per cent of US companies said improving relations with the EU as among their top three priorities.

More than 1.5m people work for US companies operating in the UK, which remains attractive overall because of a common language, adherence to the rule of law and access to finance.

Duncan Edwards, chief executive of BritishAmerican Business, said while the overall transatlantic business relationship was strong, US companies operating in the UK “are less confident in it as a place to do business than last year”.

“Concerns over the UK’s fractured relationship with the European Union, its future tax competitiveness, and persisting restrictions to labour mobility and access to talent persist, and are the driving force behind this slip in confidence,” he added.

In March 2021 the then chancellor Rishi Sunak announced plans to increase corporation tax from 19 per cent to 23 per cent in 2023 as part of efforts to repair the UK’s public finances after the coronavirus crisis.

The reopening of the British economy following the pandemic, after many workers were furloughed or lost their jobs, has resulted in labour shortages in multiple sectors, including travel and hospitality.

The survey said a significant number of US companies were reporting “ongoing labor shortages” in the UK that they cannot fill locally, echoing the concerns of British trade bodies.

Addressing those concerns should be top of the list of priorities for Johnson’s successor “if momentum is to swing back in favour of the UK” for transatlantic investors”, said Edwards.

The British Chambers of Commerce last week urged the government to relax immigration restrictions after a quarterly recruitment survey found more than 75 per cent of businesses in construction, manufacturing, logistics and hospitality were reporting difficulties in filling vacancies.

The Department for International Trade said that US investor confidence remained high in the UK.

“Through our ambitious programme of US state-level agreements, our bilateral joint dialogues and drive to break down market barriers, we are boosting UK-US trade and unlocking opportunities for businesses on both sides of the Atlantic,” added the department.